Introduction
Ajmer – a city in Ajmer District in Rajasthan State, a very beautiful city surrounded by the mountain by all sides. You will see the spectacular Aravali Mountains around Ajmer. Ajmer is also known as Ajaymeru, ruled by Prithviraj Chauhan. It was a key centre of Chauhan power along with the twin capital of Delhi, but after Prithviraj Chauhan defeated by Sultan Mohammad Ghori in 1193, it had to pass through a chequered and violent history.
Ajmer has remained throughout a great centre of pilgrimage for both Hindus and Muslims.

Geography
Ajmer is situated in 26° 27, N. lat. and 74° 44, E long, on the lower slopes of Taragarh hill, in the Aravalli Range. To the north of the city is a large artificial lake, called Anasagar, adorned with a marble structure called Baradari.
Elevation 486 m (1,594 ft). 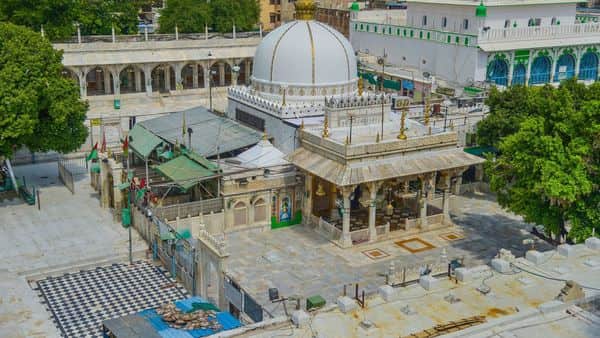 Adhai-din-ka-Jhonpda : Adhai Din Ka Jhonpra – literally means “shed of two and a half days” – a mosque built in a two-and-a-half days. This mosque was commissioned by Qutb-ud-din-Aibak, on orders of Muhammad Ghori, in 1192 CE. It was completed in 1199 CE, and further beautified by Iltutmish of Delhi in 1213 CE. This is one of the oldest mosque in India, and the oldest surviving monument in Ajmer, Rahasthan, INDIA.

Mayo College :
The only boys-only independent boarding school in Ajmer, Rajasthan, INDIA. Founded in 1875 by Richard Bourke, who was the Viceroy of India from 1869-1872. This is one of the oldest public boarding schools in India. 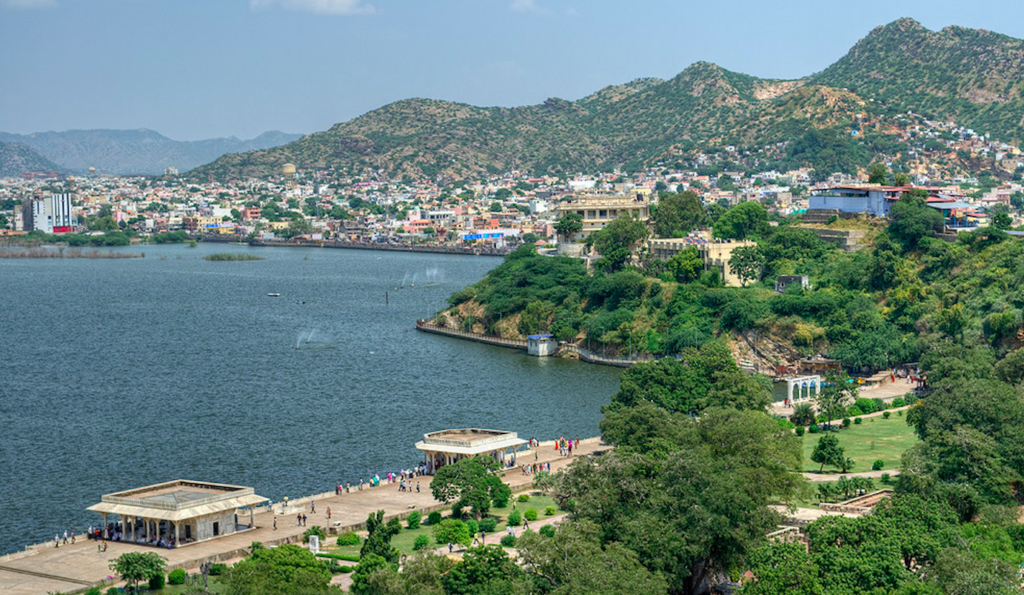 Anasagar Lake :
An historic man-made lake built by Maharaja Anaji (1135-1150 AD). A garden laid by Em-peror Jahangir is just by the lake side. Emperor Shah Jahan later added five pavilions, known as Baradari, just between the garden and the Lake Anasagar Lake.

Soniji Ki Nasiyan :
An architecturally rich Digambara Jain Temple, built in the late 19 century. The main chamber is known as Swarna Nagari ‘City of Gold’, has several gold-plated wooden fig-ures, depicting figures in the Jain religion. Also has a gold model of the city of Ayodhya, the birthplace of Ram

Lake Foy Sagar :
Just outskirts of Ajmer, is a picturesque artificial lake, was created as a famine relief project in 1892. It offers a beautiful panoramic views of the neighbouring Aravali moun-tains.

Taragarh Fort :
The Fort originally believed to be built by Mughal ruler Akbar. This is reputed to be one of the oldest hill forts in India and the world.

Akbari Fort & Museum :
The Museum was once the residence of Prince Salim, the son of Emperor Akbar in 1570.This museum houses a collection of Mughal and Rajput armour and sculpture.

Excursions Trips from Ajmer :
Pushkar Lake or Sarovar- a sacred lake of Hindus A famous holy Pushkar Lake is just about 11 km from Ajmer. The Hindu scriptures de-scribe it as Tirtha Raj – the king of pilgrimage, surrounded by 52 bathing ghats (a series of steps leading to the lake), where pilgrims throng in large numbers to take a sacred bath, especially around Kartik Poornima (October – November) and the Pushkar Fair happens. More than 500 Hindu temples are situated around the lake precincts.

Jagatpita Lord Brahma Temple :
A Hindu Temple in Pushkar, Rajasthan, INDIA. The temple is one of very few existing temples dedicated to Lord Brahma – Hindu creator GOD, and the most prominent among all. The temple, believed to be 2000 yrs old.

Pritviraj Smarak :
The Smirk is dedicated to Maharaja Prithviraj of Rajput Chauhan dynasty of Ajmer, located on the way from Ajmer to Pushkar. Tourist can enjoy a great view of Ajmer city from Pritviraj Smarak.