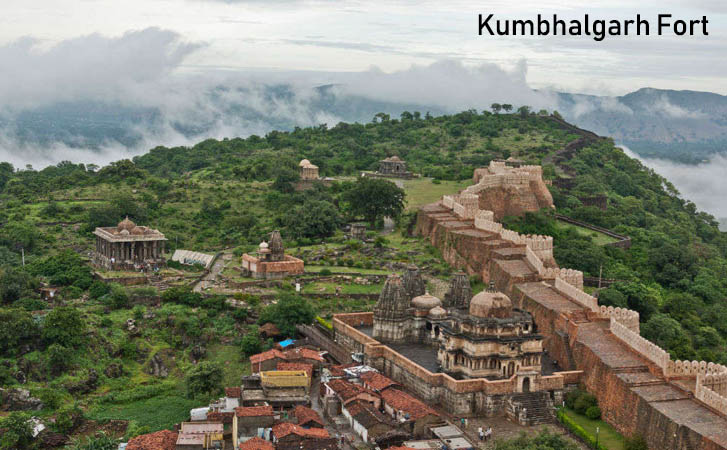 Location: Rajsamand district, Rajasthan on the Western Aravalli hills at a mere distance of 64 km in north-west India.

Kumbhalgarh Fort has made its mark in history as the second largest wall after the Great Wall of China.  The fort was considered to have been worked by Rana Kumbha in the fifteenth century is 3600 ft tall and 38km long that encompasses the zone of Udaipur. The fort is announced as UNESCO World Heritage Site group under the Hill Forts of Rajasthan. It is found deliberately on the western Aravalli slopes.

Having seen a large number of wars, the sloping hill serves as an unbreakable boundary.  It has seven strengthened gateways and various Jain temples inside it. Alongside the Lakhola Tank which is the most popular tank inside the fortress, built by Rana Lakha. The fort comprises of various Hindu and Jain temples both demonstrating the religious resilience of the rulers and how they patronized the Jains and empowered their way of life in the kingdom. It is an amazing fort with good photography on the staircase.

The splendid Kumbhalgarh fort is said to be the origination of Maharana Pratap. The fort further comprises of engravings on the foot of symbols in Hanuman Pol that gives complexities of the development of the fort. The Badshahi Bavdi is a ventured tank built by the general of Akbar to give drinking water to the military troops in 1578.  At first, the fort confronted numerous issues during the development process but was settled by fasting of people and the fundamental entryway of the fort which is the Hanuman Pol contains the sacred religious place and a temple to recall the incredible fasting of a warrior.

The time between the months of Sep/October to February/ March can be considered as the best time suited when the climate is even cooler and suitable.

For Indian Nationals & SAARC countries tourists, the fare to the fort is Rs 10, 15 & for foreigners, the amount goes to Rs 100.

Open for all tourists from 9 am in the morning till 6 pm in the evening.

Things to do in & around

The fort consists of Ganesh temple which is assumed to be one of the earliest temples built inside the Kumbhalgarh fort. Another temple is the Neel Kanth Mahadeva temple built-in 1458 CE. This temple is the central shrine of Lord Shiva in which the idol is made of black stone which was renovated by Rana Sangha.

How to reach there

By Air: the Nearest domestic airport is Udaipur Airport from where you can take flights to various other popular destinations like Mumbai, Delhi, Jaipur, Jodhpur, Aurangabad.

By Rail: The closest railway station is Falna Railway Station where a traveler can get down and avail a taxi or a bus to reach the fort. Also, Udaipur is the nearest rail junction from Kumbhalgarh city as there are so many trains that run towards Delhi, Ahmadabad, Chittaur, Ajmer, Jaipur, Udaipur & Jodhpur.

By Road: One can easily reach the fort either by commuting regular buses or by hiring taxis/ cabs from Udaipur city.