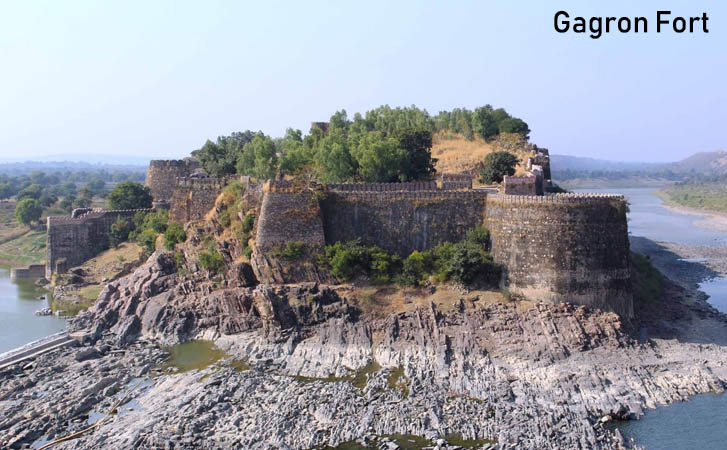 Location: Situated 14 Km from Jhalawar district near Kota in Rajasthan state in India. Stands on the hilltop & surrounded by water on all 3 sides.

Opened since: Open for all the tourists since 1592

Designation: 37th session of the World Heritage Committee in the year 2013.

Gagron is an area which has seen the huge fearlessness of Khinchi sovereigns/ patrons and the ideal sacrifice of the lives of Royal Rajput ladies as they performed the act of ‘Jauhar’. The region was at once the pre-eminent city in the Malwa region long before the popular urban communities like Bundi, Kota, and Jhalawar.

Located 12 km away from Jhalawar city, Gagron Fort is among the impressive medieval forts in Rajasthan. One among the six forts of Rajasthan, listed in UNESCO World Heritage Site. It is a heritage fort covered by water on three sides & a thick forest on the other side.

It is the only glorious hill & water fort in Rajasthan which is on the banks of the meeting points of two rivers named Kalisidh & Ahu. This gigantic fort dots the landscape of royal Indian state attracting swarms of tourists every year. Built by the Doda Rajputs in the 8th century & was again rebuilt until the 14th century, the majestic fort was seized by the Chauhans in the 12th century. It is a place lesser known to the mainstream tourists & hence apart from peace and quietness. Thus, it is an iconic fort of Hadoti region.

Ancient Indian history itself speaks for the marvelous Gagron Fort in Rajasthan. Construction of the fort was begun as early as in the seventh century & its current structure was also built over several centuries ago. Long-time ago, the majestic fort was established in 1195 AD by Raja Bijaldev of the Parmara Empire. As per legends/ historic information, the place was also known as ‘Galkangiri’ as it is believed that the powerful saint Garg Rishi got immense restoration and meditation in this fort.

Gagron Fort is the only hill and water fort in Rajasthan. It was included in the list of World Heritage Site by UNESCO in 2013. Gagron Fort is a sightseeing exceptional fort, bordered and secluded by a ‘Van’ (forest-protected) as well as a ‘Jal Dunrg’ (water-protected).

There is no ticket for entering the Gagron Fort. Hence, it’s free of cost for all the visitors.

The fort is open for all worldwide visitors from 9:00 AM to 6:00 PM every day throughout the year.

This is a very good fort which is extremely worth for you to spend only a stretch of 4 hours for sightseeing the whole of it. Henceforth, the best suited time will be during the colder months of September to March because of the serene environment rather than the scorching heat of summers.

How to reach there

Gagron Fort is at a distance of about 12 Km from Jhalawar city in Rajasthan. It can be reached via any means of transportation below.

By Air: The nearest airport is Indore Airport in MP at about 232 Km. The locals (native people) & outsiders can book a taxi to reach Jhalawar.

By Rail: The nearest railway junction is Jhalawar (newly constructed) at only 2 km from the main city.

By Road: One can easily reach the fort by hiring a no. of taxis, cabs & auto-rickshaws. Also, NH-12 passes through the town of Jhalawar. You can also avail the facility of any road transport.

So, plan your trip to Gagron Fort. Don’t miss out a single thing. See & do a lot more!