Railway: Bikaner is linked by rail with Delhi, Jaipur, Jodhpur, and Udaipur.

Bikaner – a city in the northwest of Rajasthan State, founded by Rao Bika in 1486 and from its small origins it has developed into the fourth largest city in Rajasthan.

Bikaner is famous for its “Bikaneri Bhujia” (a spicy Indian snack made from moth dal, spices and edible oil, consisting of fried onions, similar to potato fritters). Bikaner is also famous for its handicrafts, leather articles, its palaces and having asia’s biggest camel farm.

The city, Bikaner, is also known for its intricately carved Jharokas. These stone screens are found on the windows of forts and havelies – traditionally, women would use the screens to watch the world while remaining hidden

Bikaner is situated in the middle of the Thar Desert with very little rainfall and extreme temperatures.

Bikaner has an average literacy rate of 79%, higher than the national average of 74.04%.

In Bikaner, 14% of the population is under 6 years of age.

A fort in the city of Bikaner, Rajasthan. This fort was originally called Chintamani and was renamed Junagarh or “Old Fort” in early 20th century when the ruling family moved to Lalgarh Palace outside the fort limits.

Junagarh Fort was constructed in 1588 AD by Raja Rai Singh, one of Emperor Akbar’s most distinguished generals. The fort complex houses some magnificent palaces constructed in courtyards, balconies, kiosks and windows.

This museum is located in the great Junagarh Fort. The museum hosts royal costumes, textiles and accessories of Rajasthani royalty. The ‘Poshaks’ (garments worn by ladies) are a reminder of the now lost craft of traditional designs, styles and workmanship. The family portraits on display narrate a story about how changing cultural settings in fluenced the style of immortalising the former rulers.

Lalgarh Palace is a palace and heritage hotel in Bikaner, built between 1902 and 1926, for Sir Ganga Singh, Maharaja of Bikaner, Rajasthan. This architectural mavel is made entirely of red sandstone. The design was conceptualised by Sir Swinton Jacob, who created this oriental fantasy by blending Rajputana, Islamic and European architecture.

Ganga Government Museum is the best museum in Bikaner, Rajasthan. This museum contains a rich desplay of archeological artefacts from Harappa and the early Gupta periods. There are separate sections for paintings, arts and crafts, woven carpets, clay pottery, ancient coins and Rajput weaponry.

Bikaner has several havelis and the most famous cluster being the Rampuria Group of Havelis, built of dulmera (red) stone. Every aspect of havelis – Jharokhas (casements), entrances, latticed windows, divankhanas, gumaharias or basements, is simply exotic. These havelis are decorated with golden work of the highest quality. The dankhanas (drawing room) take one back to the Mughal and Rajput era.

Laxmi Niwas Palace was the residence of the king of Bikaner, Maharaja Ganga Singh. The palace was built between 1898 and 1902 by British architect Sir Samuel Swinton Jacob. The structure displays an Indo-Saracenic architectural style. Now this is a luxury hotel.

The rulers of Bikaner regarded Lord Laxminathji (Lord Vishnu) as the real king of Bikaner and themselves as his Deewans or Ministers. The temple, made of marble and red stone, was constructed to enshrine Lord Laxminath whose throne rests here.

This 15th century Bhandasar Jain Temple dedicated to the 5th Tirthankar (a person that has comquered the cycle of life, death and rebirth and paved the path for others to attain nirvana), Sumatinathji, and is one of the oldest mounuments of Bikaner. The temple design includes intricate mirror work, murals and gold leaf paintings. Devotees throng to the temple from all conrners of the country.

The National Research Centre on Camel is 8 kilometres from Bikaner city. This camel research and breeding centre is the only one of its kind in Asia. This camel breeding farm is spread out over 2000 acres of semi-arid land and is managed by the Government of India.

The royal crematorium has several exquisite chhatris (cenotaphs), each dedicated to the memory of a ruler of the Bikaji dynasty and situated on the exact spot where each of them was cremated. The chhatri of Maharaj Surat Singh is a fine example of the architecture of that era. Devi Kund also has cenotaphs of 22 female members of the royal family prior to Maharaja Gaj Singh Ji, who commited Sati. There is also one cenotaph of a Sata (male Sati) of a ruler. Maharaja Surat Singh’s Chhatri is built entirely in white marble with spectacular Rajput paintings on its ceiling.

Deshnok temple or Karni Mata Temple is a beautiful structure made of stone and marble. This temple is dedicated to Karni Mata. The image is decorated with a ‘mukut’ (tiara) and garlands. The temple is known the world over for the presence of kabas (rats) that roam freely within the temple precincts. 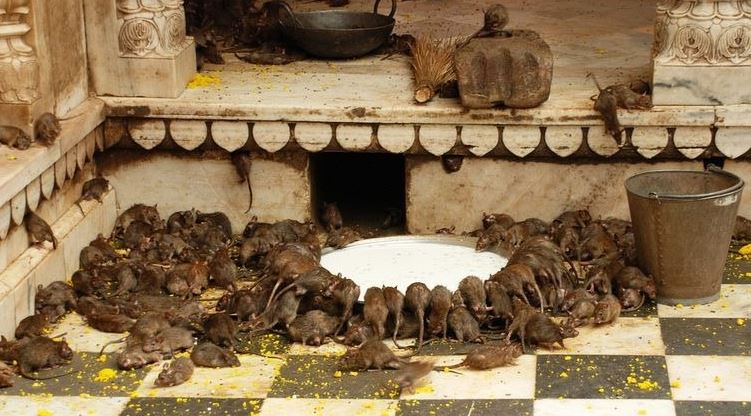 Kolayatji (about 50 km from Bikaner)

Kolayat – an important pilgrimage place for Hindus. Locals and devotees from distant places visit Kolayat temple complex every year. History tells the story of Kapil Muni, the advocate of Shankya yoga, who was so mesmerised by the serenity of this place that he interrupted his journey to the northwest and stopped here to carry out a ‘tapasya’ (penance) for the redemption of the world.

Kalibangan – a town located in Hanumangarh district, Rajasthan about 205 km from Bikaner. The prehistoric and pre-Mauryan character of Indus Valley Civilization was first identified by Luigi Tessitori at this site. Kalibangan’s excavation report was published in its entirety in 2003 by Archaeological Survey of India, 34 years after the completion of excavations.

Kodamdesar Temple is 24 km from Bikaner. This place of worship was initially chosen as the site to lay the foundation of Bikaner, but was later shifted to its present location.

Shive Bari Temple is just 6 km from Bikaner. This shiva temple is fortified by a high wall. The temple commissioned and built by Maharaja Doongar Singh in the 19th century to commemorate his father Maharaja Lal Singh. The highlights of Shive Bari red stone temple are beautiful wall paintings, the four faced black marble Shiva statue and a bronze Nandi statue facing the Shiva-Lingam. The temple also houses two large reservoirs of water called as bawaris.

Gajner – an incomparable jewel of the Thar. The Gajner Palace was founded by Maharaja Gaj Singh Ji of Bikaner in the year 1784, and then completed by the great Maharaja Ganga Singh of Bikaner on the banks of the lake. This Gajner Palace was meant to serve as a hunting and relaxing lodge for the royal family and guests. It has now been converted to a heritage hotel. 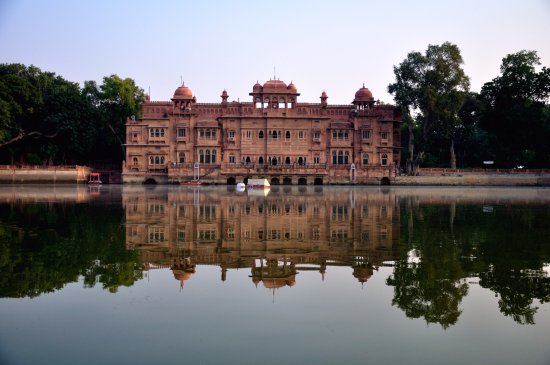 Most of the visitors to the archives are reserchers and academicians, who come here to study the ancient administrative records that are preserved here. Some of the records date back to the Mughal period and include, among others, Persian Farmans, Nishans, Manshurs, etc. records created during the administration of the various princely states of Rajasthan can also be found here. This exceptional collection is of immense value.

Katariasar, on the Jaipur Road, is a village rich in ethnic, rural and cultural life. In Katariasar, one can walk on sand dunes and view the sunset against the desert landscape. The main attraction of Katariasar village is its inhabitants, the Jasnathjis, who are fire dancers. Herds of chinkaras, desert foxes, rabbits, peacocks, parrots and partridges can be spotted here.

Bikaner – one of the best places for birders, if they want to spot some voltures. Drive about 12 km from Bikaner and you reach Jorbeed – spot of opportunities for a birders. Jorbeed is one of the best places to look at raptors. Birds like the Steppe Eagles, Griffon Voltures, and Egyptian Voltures are as common as crows in this region. A visit to Jorbeed is all about seeing the largest congregation of eagles and voltures in Asia, and if you are lucky, you might even spot the rare yellow eyed pigeon here as well. Jorbeed is truely a birder’s paradise, with thousands of magnificient raptors dotting the landscape.

The National Research Centre on equines, Bikaner Campus has recently taken an initiative to conserve and propagate equines through ecotourism. This campus has now been opened for the Indian and Foreign tourists. The ambience of the campus is a big attraction in itself. However, the campus has initiated Horse Riding, Pony Riding, Tonga Riding and Buggy Riding in the lush green zones of the campus to give nature-talking environment on one hand and a Desert Point with a traditional hut for the frangrance of Bikaner state in Rajasthan on the other hand. The elite Marwari horses – the pride of Rajasthan, Kathiawari horses – the Elegance of Gujarat, Zanskari horses – the Ponies of Ladakh and Manipuri horses – the Famous Polo Ponies along with the French Poitou donkey and White Gujarati donkeys constitutes other major attractions.

This wildlife sactuary is just 32 km on the Jaisalmer road. The sanctuary is a lush green forest which is a haven to the nilgai, chinkara, black buck, wild boar, flocks of imperial sand grouse and many other species of migratory birds that make the sprawling forest their winter home. 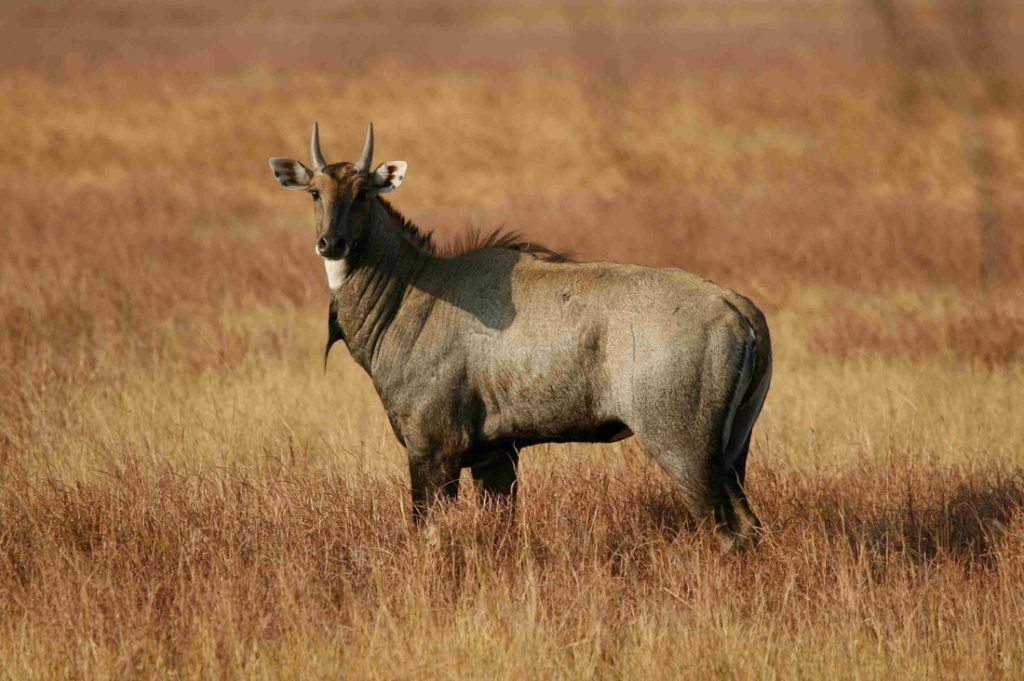