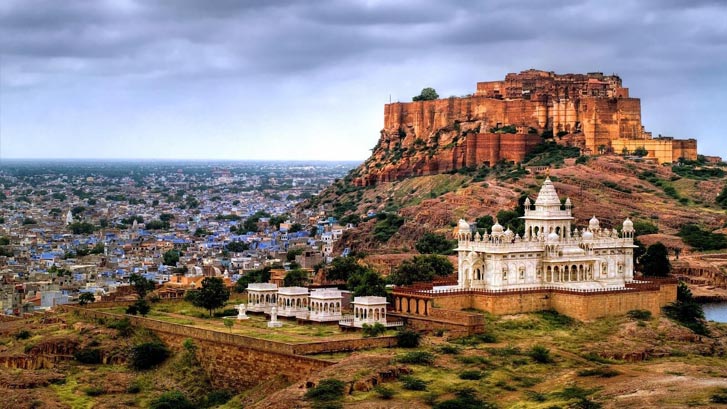 Rajasthan is a place which has its own long-term history date back to old-century temples, dynasties, Kings & their Queens. The historical place is dotted with a large number of mesmerizing hill forts and palaces in Rajasthan, wildlife sanctuaries, Lakes and much more to excite a traveler. The” Land of Maharajas”, popularly known for its majestic forts and palaces, sand dunes and a rich history.

These forts not only capture your attention but also offer an experience of great chivalry. Each fort has its own long tale which tells us story about the famous Kings, Kingdoms, Colorful culture, traditions of that time. So, what all you know about the famous captivating forts of India. Here is a curated list of some of the most popular hill forts of Rajasthan which are also the most traveled by tourist destinations for decades.

The huge list of Hill forts in Rajasthan remains incomplete if we forget to mention the famous Kumbhalgarh Fort. Having the world’s second largest wall after the Great Wall of China, this fort offers an incredible view of exotic forests & deep ravine.

Also, it is home to the most famous beautiful temples & palaces, enlarged gates, and well-laid gardens. It is also listed among one of the UNESCO’s World Heritage Sites. Here one can visit Kumbhalgarh Palace, Kumbhalgarh Wildlife Sanctuary, Parsuram Temple, Vedi Temple, Mammadev Temple, etc.  All these make the fort an ‘Enchanting place to visit’.

Not only its famous hill forts but also deep wildlife sanctuaries, old-century temples make it a worth place to explore.

Thus, it is widely known as an ‘Architectural wonder of Rajasthan’.

Located in Amer town near Jaipur in Rajasthan, the fort’s beauty is simply breathtaking because of its scenic marvel view. The 16th-century fort was built using red sandstone & white marble by the general of Akbar, Raja Man Singh. It is one of the best tourist destinations not only in Jaipur but also in the whole Rajasthan.

The famous Amer fort was also declared a UNESCO World Heritage Site in 2013, as part of 6 hill forts in Rajasthan. Its architecture is a combination of both Rajputs (Hindu) and Mughals (Islamic) styles.

*Note: It has an open air passage that connects it to Jaigarh Fort.

Must-visit Hill forts in Rajasthan, the Jaisalmer Fort is built in the mid of 12th century. Also known as the Sonar Quila (Golden Fort) is one of the largest forts in the world. It is in the list of UNESCO World Heritage Site.

The fort is popularly called as Sone ka Quila by the local people of the region and is one of the most magnificent monuments in Jaisalmer city. Tourists here can enjoy Boating in Gadi Sagar Lake, Parasailing in Kanoi, Paramotoring & Quad Biking in Sam Sand Dunes, Desert Safari & Camping and many more adventurous activities.

One of the largest Hill forts of India, Chittorgarh fort is also a UNESCO World Heritage Site which was built it’s way the back in the 7th century. The famous fort has some of the most heart-rending legends. It witnessed the act of Jauhar (sacrifice by Rajput women and children following the fort’s seize to save their honors) thrice and the tragic tale of the gorgeous Rani Padmini who chose death over forceful custody by the Muslim Intruder Allaudin Khilji.

The fascinating sights of massive gateways,  commemoration towers, imperial palaces, forts, and reservoirs are bound to leave you speechless on your tour to Rajasthan.

Hence, it can also be called as Padmavati’s Chittorgarh Fort, one of the largest forts ever built.

Mehran or Mehrangarh Fort situated in Jodhpur,  is one of the largest Hill forts in India.  Standing on a hilltop, this 15th-century fort was built by Rao Jodha in the year 1459 and seems to enjoy the mesmerizing view of blue-painted houses in the city.

Starring in ‘The Dark Knight Rises’, Mehrangarh Fort gathered international limelight as one of the best forts in Rajasthan The gloriously decorated palaces and the must-visit museum features Royal Palanquins, Howdahs, Turbans, Armory, and Paintings are the highlights of the fort. All these boasts of seven massive gateways. Here are some of the best attractive tourist sites like Sheesh Mahal, Phool Mahal, Jhanki Mahal, Chamunda Mata Temple, Mehrangarh Fort Museum, etc.

* The fort also offers an enthralling ‘Flying Fox’ activity over its walls.

Surrounded all around by lavish greenery, picturesque lakes and the thrilling wild trails of Ranthambore National Park, this fort is indeed a majestic spot to explore. The fort was built in the early 11th century and remained invincible for a long time.

Although, it was in the state of ruins, yet the fort has not lost its rugged charm and is counted among the unique forts of Rajasthan. Palaces and temples here (especially Ganesha Temple) are the top highlights of the place, while the excitement of being in the tiger country is beyond the limit. Ranthambore Fort is the most visited places in the Ranthambore National Park. It has also been declared as a world heritage site by UNESCO.

The most sought after activity here include going on Tiger’s Trail, Hiking up to Ranthambore Fort, Birdwatching in Tiger Habitat of Ranthambore, Jungle Safari, Hot Air Ballooning, Wildlife Viewing, etc. Not only this but also you can explore world heritage monuments.

CONCLUSION: These amazing forts will not only steal your hearts but also leave an embarking impression over your minds forever.